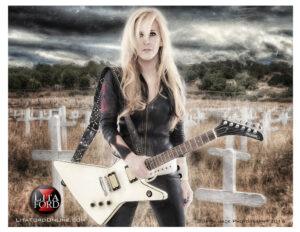 Lita Ford’s career began in 1975 as a founding member and guitarist of the groundbreaking all female group the Runaways. The groups hard rock / punk edge spawned hits like “Cherry Bomb” and “Queens of Noise”. Lita and the Runaways proved their timelessness in 2014 when “Cherry Bomb” was featured in the critically acclaimed Marvel / Disney Studios hit movie “Guardians Of The Galaxy” and was nominated for a Grammy Award.

In 1983 Lita launched her carrier as a solo artist with her début album “Out For Blood” establishing her as the premier female performer in rock and Heavy Metal. 2018 celebrated the 30th anniversary of the self-titled multi platinum “Lita” album. Released on February 2nd 1988 the “Lita” album boasted four charting hit singles. “Back to the Cave”, “Falling In and Out of Love” (co written with Motley Crue’s Nikki Sixx) along with the world wide mega hits “Kiss me Deadly”, nominated for the MTV Video Music Awards Best Female Video of the year and the certified gold ballad single “Close my Eyes Forever” featuring Ozzy Osbourne, which remained in the Billboard top 10 for 25 weeks.

Lita and her long-time band mates Patrick Kennison (Guitar), and Bobby Rock (Drums) and Marten Andersson (Bass) continue to tour at her normal feverish pace. Ford continues to encourage and inspire aspiring musicians by teaching and mentoring through here work with Rock and Roll Fantasy Camps.

Click here to view all of our financial supporters and learn more about being a sponsor!