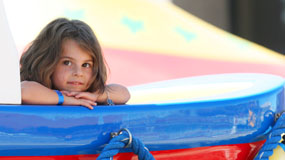 The Marion Popcorn Festival in downtown Marion, Ohio, is the largest popcorn festival in the world annually attracting crowds in excess of 250,000.
Click Here to Learn More! 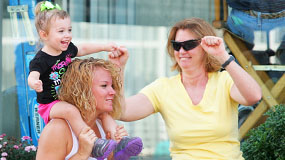 From national acts on the Main Stage to regional and local talent on the Showcase and Poppin' Party Stages, the Festival offers tons of free entertainment.
Click Here to Learn More! 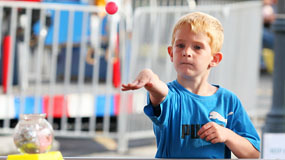 Rides open Thursday at 3pm, 1pm Friday, and 1pm Saturday, and run through the close of the festival each night.
Click Here to Learn More! 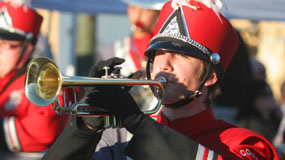 The Popcorn Festival Parade is the place to be as thousands gather to watch one of the area's largest parades wind through downtown Marion.
Click Here to Learn More!

This year marks Rumours’ 24rd year together since they began in 1997. Come out and and join them as they rock Marion with many of your favorite Fleetwood Mac hits, as well as solo hits, from Stevie Nicks, Lindsey Buckingham and Christine McVie.  The lineup includes: Lance Horwedel as Lindsey Buckingham (lead vocals and guitar); Claudia Doman as Christine McVie (lead vocals, keyboards and guitar); Shannon Martin-Paul as Stevie Nicks (lead vocals); Dave McNary as John McVie (bass); Brian Runkle as Mic Fleetwood (drums) and Matt Corkins (keyboards).

The bands’ interests are deeply rooted in the history of Fleetwood Mac’s song archive. You can tell by their set list dating back into the Peter Green Era. They also delve into Stevie, Lindsey and Christine’s solo careers which span over 50 years.  Come take a walk down memory lane with Rumours as they recreate the sights and sounds of these amazing singers, songwriters and musicians everyone loves.

EDDIE MONTGOMERY OF MONTGOMERY GENTRY, will be taking the mainstage Friday, September 10.

Eddie Montgomery recently released “Outskirts,” a seven-song EP. With 20 plus charted singles, the Kentucky native has earned CMA, ACM, and GRAMMY awards and nominations with undeniable blue collar anthems like “Hell Yeah,” “My Town,” and “Hillbilly Shoes.” They’ve notched five No. 1 singles, “If You Ever Stop Loving Me,” “Something To Be Proud Of,” “Lucky Man,” “Back When I Knew It All” and “Roll With Me.” They were inducted as Grand Ole Opry members in 2009 and were inducted into the Kentucky Music Hall of Fame in 2015.  Montgomery continues to record music and entertain audiences after Montgomery Gentry member and co-founder, Troy Gentry, died in a helicopter crash in September 2017.

GREAT WHITE, will wrap-up the mainstage entertainment on Saturday, September 11.

Since 1982, the Great White sound has captivated audiences worldwide with crushing blues-based guitar riffs and swagger that invokes an emotional high for anyone that listens. The band’s core writing team of Michael Lardie and Mark Kendall forged numerous hits over the years and when Audie Desbrow joined in 1985, the grooves hooked an amazing stride.

Their arsenal of songs include the Grammy nominated Best Hard Rock Performance hit, “Once Bitten, Twice Shy.” Great White has sold over 10 million albums worldwide, has six Top 100 billboard hits, nine Top 200 billboard albums, two platinum albums and clocked the top of MTV four times. To experience their hits live in concert – ‘Rock Me’, ‘Mista Bone’, ‘Save Your Love’, ‘House of Broken Love’ and ‘Lady Red Light’ – is to ride an emotional wave of sultry connections, arousing lyrics and an all-out marathon of hard-hitting orchestrations.

The 2021 dates of the Marion Popcorn Festival are September 9, 10 and 11.  All performances on the Festival’s main stage begin at 8:30 p.m. and are free of charge.  A limited number of Kernel sponsorship seats are available for any of the Main Stage performances by calling 740-387-FEST.  Other events include the Popcorn Parade with over 300 units, a popcorn cooking contest, fine arts show, crafts, corn hole, Community Showcase Stage, Poppin’ Party stage and much more.
For more information, visit our web site at www.popcornfestival.com or call 740-387-FEST.   The Marion Popcorn Festival is sponsored in part by the City of Marion.

This Year We Are #PoppinForty!

To our Visitors, Sponsors, Vendors and Friends: we are excited to announce the return of The Marion Popcorn Festival, coming this September 9, 10 & 11 in Downtown Marion, Ohio. This year, we will be celebrating our 40th anniversary. That’s right, “40 Years of Magic”.

There is currently lots happening & we are working hard behind the scenes to bring you our best festival ever. More will be unveiled in the coming weeks so check back & like/follow our FB page https://www.facebook.com/marionpopcornfestival as more exciting news/updates will be shared here first. See you in September in Downtown Marion.

There are no upcoming events.

Click here to view all of our financial supporters and learn more about being a sponsor!